This week the world lost a giant of a man. His passing will not be covered by the evening news. It will not be talked about it in every social circle or in the typical office “water cooler” conversation. Although the masses don’t know it, everyone in the U.S. and those in many other countries can thank him for being safer when they are in buildings, other structures, and even their own homes because of his body of work in Fire Protection Engineering.

John L. Bryan, PhD – affectionately known as “Prof” by the graduates of the University of Maryland Department of Fire Protection Engineering – died on Monday, October 13, 2014. Prof was 87 years old. He was the Department’s founder and first Chairman with approximately 600 graduates in his 37 years as our mentor and inspiration. He was known for his candor and his amazing memory (he could recall EVERY graduate, when they graduated, and where they were employed).

How is it even possible for one man to single-handedly affect the fire and life safety of hundreds of millions of people where they work, live, and play? By being a staunch supporter, leader, innovator, practitioner, researcher, mentor, and teacher to approximately 600 Fire Protection Engineers that in turn go out into the world and become leaders in the same honorable endeavor and take this highly specialized engineering discipline to the next level – all the while mentoring successive generations of Fire Protection Engineers utilizing the principles instilled by Prof. The Life Safety Code is the world’s premier source for fire and life safety and 10 of the 14 committees that prepare this Code are chaired by engineers that Prof trained. His impact on this particular engineering profession – and in turn the world as a whole – is immeasurable.

Professors/teachers having a positive impact on their students’ lives is nothing new or unique; it happens every day. But Prof had that je ne sais quoi; some intangible ability where those around him knew they were with someone very special. He commanded our respect…..and not in the way where he told us that we had to respect him or else! No Prof was just Prof and that’s all it took for every student to revere him. He was responsible for guiding us into a rewarding profession and giving us the tools to be successful to the benefit of the public at large. He truly cared for us all.

When I first moved to the Atlanta area, Prof came to town to teach a Life Safety Code class and called me out of the blue. When I answered the phone, he asked for me and I instantly recognized his soft spoken, gentle tone and didn’t need to ask who was calling. Again being the caring Prof, he was checking in on a protégé and invited me to have dinner. Dinner was good, the conversation was great and he of course had one of his signature cocktails – a Beefeater Martini, on the rocks, extra dry, with a twist.

He kept the numerous graduates our program as a cohesive group by holding a “Maryland Alumni Dinner” in conjunction with the annual National Fire Protection Association convention. While at the convention, each grad had to wear the famous UMD Fire Protection Engineering button; if Prof caught one of us without the button proudly displayed…..the offender had to buy another button on the spot with the proceeds going to the Department to benefit the current students. At the dinner each grad had to introduce themselves, state their year of graduation, and name of their employer. Then, Prof would give us an update on what was going on back at the Department. No wonder some people in the fire protection industry would call us the “Maryland Mafia!”

So Prof, I want to thank you for being such an important influence in my life. I will be there on November 16th in Frederick, Maryland – with many of the other engineers you trained – to pay our last respects. Just one day after what would have been your 88th birthday. May you rest in peace Prof. 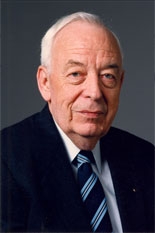 One of Prof’s Famous Snowmen. Click here for details.